Well, I think I mentioned in my last post that I decided to buy a slightly better ukulele, since I’ve determined I am enjoying it enough to justify.  I’m still very much a beginner though, and on a budget, so those things definitely factored into my decision. I eventually want to try a concert sized uke, but for now, I decided it would be wiser just to pick a slightly nicer soprano.

I’ve been using the Diamond Head DU-150 ukulele up to this point, which is actually a really solid starter for the price. It usually retails at just shy of $40, but I got mine on sale for $25, and for that $25, it’s a great little uke.

It’s very often listed as a “mahogany” uke. Don’t be fooled, what they mean is mahogany in color. It’s made of maple. For a tiny little thing, it get surprisingly decent volume, and really the only functional complaint I have is the bridge. It’s painted black, so I honestly can’t tell what it’s actually made of I would suspect the same maple as the body, but if you turned around and told me it was plastic, I would not find myself surprised, really.

Now, since I’m a lefty, I restrung it out of the box (with the strings it came with, to save myself a few bucks early on). But, recently I noticed it was having more trouble than usual staying in tune, so I swapped the strings with some aquila nylgut strings I bought because, well, they were the first thing I came across when I was looking for ukulele strings, having no idea at the time that there were less expensive options. Now, the Aquila strings are great strings, but I am going to experiment with some others in due time, because, really, they’re also fairly pricey, and if I can get similar results from less expensive strings, then I would be an idiot not to experiment and see what the results are when I need to swap strings next.

ANYWAY, it was when I was switching off to the Aquila strings that the bridge started really driving me to distraction. I noticed as I tightened the strings that the wood (?) of the bridge is actually already starting to dent slightly under the pressure. That might just be the paint denting, but either way, it’s a sign that, if it’s already creasing on the 2nd set of strings it’s ever had, that that’s only going to get worse over time, and I probably can’t expect a huge amount of longevity out of this particular ukulele. Nothing wrong with that, it’s a beginner’s uke, so not one you would really anticipate using forever, and, again, for the price is a steal even if you only want it to hang on your wall and look pretty. When you can grab this thing on sale, it’s leagues beyond the cutsey alternatives in the same price range, in any case, but is absolutely a starter.

So, after browsing and browsing and being indecisive, I settled on the Kala 15S as my slightly better ukulele upgrade. For the record, I was torn between this one, one by lanikai, and one by luna. My end decision was based on bargain alone. The other two were around $80-99, even on ebay, and the Kala, with a suggested retail of $75, can be purchased for about $55 and reviews seemed to imply the three ukuleles were all of a similar quality. It’s not the prettiest of the bunch, but it is the best deal, so the one I ended up choosing.

Out of box, the difference between the Kala and the Diamond Head is obvious, even to an eye as untrained as mine:

The uke I’ve been using – the Diamond head at the right looks like it’s smaller. It’s not, precisely.  They’re vertically the same height, but the Kala has a wider base. This is an advantage in my book. The Diamond Head is a nice little thing, but…well, newbie that I am, I haven’t quite mastered anchoring it yet, and it tends to slide down my boob. lol.  The Kala I don’t seem to have this issue, and I think that’s partially owing to the wider base. The other part I suspect is that the Kala has an actual distinct woodgrain, where the Diamond Head is a bit satiny, and I suspect from that also a bit more slippery to hold onto.

Let’s take a quick look inside: 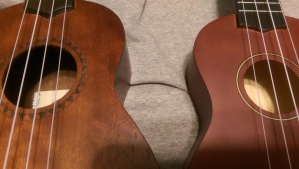 If you look in the soundholes, you can see the difference in woods pretty apparently (especially since the model sticker from the diamond head fell out pretty much the second I opened it.

The soft white wood inside the diamond head sits as a really stark contrast of the wood grain inside of the kala. (This is listed as a mahogany body.) The Kala also has a rosewood fretboard and bridge, which is a huge improvement on the diamond head, even if it has the same plastic nut and saddle.

The Kala is just overall a more solid instrument, as it should be, at twice the cost. It looks better. It feels better. It sounds…roughly the same.  In terms of practical purpose, these both suit roughly the same purpose, so on a shoestring budget, the diamond head does have a very decent sound for being such a cheap little thing. The Kala seems a little…warmer? more mellow? A hair less plinky? I’m not sure quite how to describe it. It’s definitely different, and nicer, but the difference between the two is subtle (at least on the very few things I’ve played on them.

Now, that could change as the strings settle. I’ve only just swapped it off to a lefty (it’s also sporting the nylgut strings, so I’m comparing these two instruments with the exact same strings on them. The difference is the diamond had has had them for about 2 weeks, the kala only had them put on tonight.)  Since the strings on the Kala are still stretching, and not staying in tune just yet the sound is bound to mellow a bit more once they do, and I think the sound difference is going to become more obvious at that point.

Now, I’m going to post some sound clips, but please bear a few things in mind when you listen:

1) I can barely play. Seriously. I know one song so far, and I’m not very good at it yet. So don’t hold my shoddy playing against the ukuleles. lol.

2) The strings have only been on the kala about five minutes. They are not settled, and they are not yet stretched enough to quite stay in tune.

In summary: I liked the old uke, and the diamond head is a really nice little ukulele to wet your whistle if you’re not sure you’ll like ukulele, or aren’t in a position to really spend anything. But, the new Kala is so much nicer that if you’re looking at the Diamond Head at full price, spending and extra $20 to get the Kala is more than worth it for an ukulele that is going to last longer before you’re looking to upgrade, but if you happen to come across the diamond head when it’s on sale, it’s a great little impulse buy. The Kala is definitely a more solid instrument, that I think is going to be in my collection for a good long while, where the diamond head has a shorter life expectancy.