The second workshop I went to at Uke Fest was Craig Chee’s ridiculously non-intimidating Introduction to Music Theory.

I admit the words “ridiculously non-intimidating” sold me on this workshop.  I haven’t delved into theory much specifically because it’s intimidating, and even though I have The Complete Idiot’s Guide, I’ve barely read it because I’ve found I really need to be in a place where I can focus to work on it.  I definitely can’t work on it on my more ADD days. I’m finding that I’m one of those people who needs a relatively clear physical space in order to focus, so when my desk is full of crap to do, it’s virtually impossible for me to maintain the focus required for a task that really requires my full attention.

Excuses aside, this sounded like a great opportunity to at least (hopefully) get my feet wet.  I’ve decided I like Craig Chee. He’s just such a happy, giggly person he’s virtually impossible not to like; he just seems like a happy sort of guy. 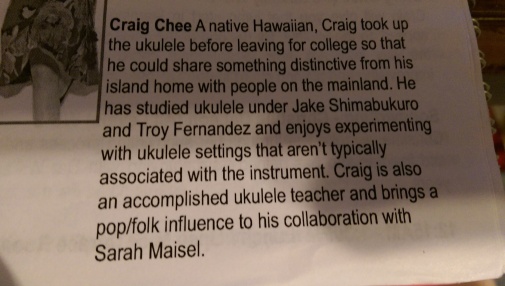 I’m going to start glossing over just the key points from here so I don’t have to write ten thousand pages of Uke Fest for four workshops and a concert. And, also because I get the impression that not every musician is happy about having their lessons given out for free. Still, pretty much everything I’m going over is fairly common knowledge to someone who’s spent an hour with a theory book, so it’s not like I’m handing out any trade secrets.

So, I learned the reason things are called what they’re called. Will I remember how to make a minor or dominant 7 or…whatever? Probably not right away, no. But, at least I can now look at all those funny chord names as variations on the major chord, which makes them a little easier on my brain.

After lunch, It was on to more practical application stuff, which is really a lot easier on my head. This is more or less to do with how I think. You know guys, I’m sure, that our brains are all wired a little differently and process information in different ways, right? I’m one of those people who says ‘why do I need to know this?’ to things that I can see no way of practically applying. So, when you tell me ‘this strum has 10 different names depending on what instrument you’re holding, or this not has 3 different names so we can prove we know our ABCs, basically my brain goes “that’s silly.”  On the other hand, if you tell me, this strum pattern is useful because it is heavily used in this particular genre of music, then cool. That makes sense, there is an immediate and practical application for that information.

And, that is exactly the subject tackled in my after lunch workshop by Lil’Rev. 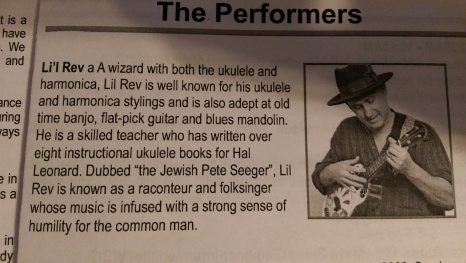 This workshop was called 12 essential strums. We didn’t get through all of them, but there is a handout that I will be revisiting, and he gave us permission to record, so a few of them I did take the opportunity to record the sound of to revisit later. We went over a 3/4 time strum, which I already knew from working on that Amanda Palmer song, and the Calypso Strum, which I already knew because….it’s EVERYWHERE. But, we also covered another rock strum, a do wop strum, a blues comp strum…

The whole purpose here was to give you strums that would help you sound more authentic and add some flavor to your playing. I’ve been working with different strum patterns all along, but to know ‘this you will hear in blues, check these musicians for examples’, etc, that’s really practical, useful information.

He has a book called “Essential Strums and Strokes” which is due out in December, and I’m planning to put that on my Christmas list for further perusal. Until then I have a dozen strums in a handout on my desk to work with.

After that, I stuck around for his next workshop: “A Treasury of 2 Chord Songs”.  This one was a no-brainer for me, because how much more beginner does it get than 2 chords in a song? And also because the only other workshop was for intermediate/advanced players, which I am definitely not. So, I have another handout to work through. There’s not much to say about that particular workshop. It was songs. With two chords. ‘Nuff said.

Next was ‘Strum Along with Jumpin’ Jim’, which was listed as a sort of play along. There was nothing opposite it, so this was also pretty much a no-brainer. It was listed as ‘all levels’, but I’m going to be dead honest here, as a beginner, if the first thing you did wasn’t learn 100000000000000000000000000000000000000000 chords, there was really no way in hell you were ever going to keep up. I mostly ended up only playing parts where there were chords I knew. The rest of the time I was silently fingering chords I didn’t and not strumming at all because by the time I got my fingers into an unfamiliar chord shape, we were already five or six chord changes down, and I had no idea where we were in the song.  Still, this one came with a hand out, too, so I can go through the songs, learn all these chords, and practice at my own pace.  If nothing else, there are a lot of chords I can practice in the handout, so it’s not like it was a waste of time, but it was literally impossible to even come close to keeping up when you only know half a dozen chords or so.

Then it was a break for dinner, which I had chilling in the gorgeous weather, chilling on top of my car.

I killed some time sketching in my notebook. And then enjoyed a nice folksy concert. I really loved the contrast of the double bass with all the ukes. They exist in sonically opposite placed, with the uke being high in pitch to the point of sometimes being plinky and overly bright (I think that’s part of what people love about it though, really), and the bass inhabiting the low end of the scale.  Hearing the two together created a really cool sort of play between contrast and balance.

There will be one or two more posts on the subject of the festival – loosely, while I go over the toys I picked up while at the festival, but that’s more or less a wrap on the workshops.