I’m still posting vaguely related to the NJ Uke Fest. I thought I’d take a post to go over my purchases. I actually didn’t buy any CDs. I was in an off week in terms of payroll, so had to spread out my cash, and thought it would be more useful to buy learning tools at the event. I figured albums could always be purchased digitally or online later on.

This sounded really interesting, and flipping through it I can see it’s definitely going to help me practice my fingerstyle technique. It’s definitely more plucking than strumming, which, really, should improve my overall accuracy as I work with it anyway.  There were a lot of books to choose from in the Jumpin’ Jim selection, but I chose one that I thought would be music I would find really interesting, and also that I could read.  Since I can’t read music yet, I wanted to make sure to choose one where the tab was easy to read.

Then, I bought the Hal Leonard Ukulele Method Book 2

Why not Book 1, you may ask? Wouldn’t it make sense to start from the top? Yes, yes it would, and if you haven’t read another ukulele book, absolutely start with book 1. But, since I’ve already worked through the Ukulele Handbook, Book 1 was almost entirely overlap for me, so I decided to go with book 2, which had some new material. It’s not that I’ve mastered the stuff in the Ukulele Handbook, but I do already have it sitting on my shelf, so there’s probably no real reason to have two beginner’s books that cover exactly the same material.

These both come with CDs, so I expect will be pretty darn useful once I crack into them.

I had planned for my shopping to be done with that, but there was a little booth with some ukuleles, and I thought it would be nice to try out a concert sized one. I have a tenor and a few cheap sopranos. I’ve been wanting a concert sized next, but I thought it would be a good idea, while I was here, to at least pick one or two up and feel how that size felt in comparison.

…from now on, no more looking at ukuleles until I’m ready to buy one.

There was this one, a cheap little thing, that I just kept picking up.  There was a little red kala that was rather cheap I sort of liked, but if it was a Kala I kept picking up, I think I would have been able to resist. Kalas are easy to find. But, the one I kept picking up I didn’t see online much, and it was actually more expensive online than the price tag I was looking at.

It may be nothing fancy, really, but something about it drew me in. While the unconventional sound holes are sort of neat-ish, that wasn’t really what sold me. It just feels good to hold. A fretboard somewhere between a soprano and tenor definitely seems like the most ‘comfortable’ fit for me. I can play all three sizes, and there’s value to having all three for the different sound quality created by the different sized bodies, but if I could only pick one, I suspect I would probably be a concert-sized kind of gal. 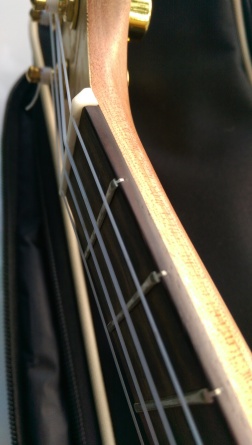 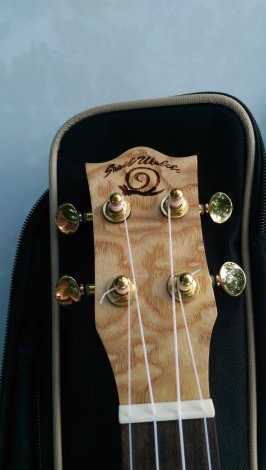 You can see from the angle shot that I might have to adjust the nut on the C string after stringing it for a lefty. There’s some potential for tuning problems since it’s really not settling into the slot on the nut, but it’s not a plastic nut, so that’s really not that big of a deal if it becomes necessary.

It’s a laminate ukulele, but one with a very matte quality. It’s got a real ‘wood’ feel with only the neck having that finished, glossy feel. Some people would hate that, but I’m finding I gravitate towards it. I like the ‘plain wood’ feel. I don’t care for that high gloss look, and actually think I prefer the sort of mellower tones I get from instruments that aren’t so reflectively glossy you could use them as a mirror. Personal preference being what it is. Some people favor brightness in an ukulele, but I seem to actually be leaning towards instruments that aren’t quite so ‘peppy’ for the most part. There’s a time and place for both, I suppose.

Here’s some very beginner noodling around to give you a sort of very basic sound test. Please forgive my horrible playing. I wasn’t really up for recording it again. Understand the muddy quality is more likely me than the instrument. When I’m paying attention to what I’m doing I can get a clearer tone, but it is 88 degrees in my house as I type this, probably closer to 95 in front of the computer, and I honestly don’t have the motivation or energy to get fancy when my 1 yr old central air unit has a fatal defect which means we’ve been melting for a week, and have no idea when we will get reprieve from that. I do not see the end immediately in sight, and pretty much all I want to do today is crawl into the freezer until the weather outside dips back down under 90 again. Ice cubes are melting in my water glass almost faster than I can put them into it, and while these temperatures may mean nothing to more Southern folks, when it’s hotter in the house half the time than out of it, I am seriously considering going for a drive just to cool off for a bit.

In any case, I now have an uke in every size, and they all have difference enough in tone enough to justify them. Now, I definitely need to learn to play well, to justify having spent the money!

Until Next Time, I’m melting…but that doesn’t stop my noodling.

2 thoughts on “Two New Books, and a Snail Ukulele”