As usual, I have way more that I want to say than time I have to say it in. I’ve been swapping between uke and guitar the past several days – alternating between working through more lessons of that Center Stage Academy groupon now that I’ve conquered Wagon Wheel, and determined the other songs in volume 2 of the lessons are crap that I don’t want to learn. I’ve moved onto Volume 3, which starts off with things like the major scale, and how chords can be built off of it, so there’s some touching on theory, where they talk about how on the ukulele a chord is built from the 1st, 3rd, and 5th, note of the major scale, and a minor is the 1st, flatted 3rd, and 5th. (I think I’m remembering that right, then again, I learned it once before and it didn’t stick, so we’ll see if I manage to hold onto the information this time.)  He very passingly mentioned diminished notes when he was explaining the progression of…I think it was Major Minor Minor Major Major…ah, okay, I have to revisit that lesson before I can continue further with any coherence. Was it a minor and then diminished? I forget.  I’ve touched on this before, and not remembered it before. The instructor basically says that the last bit is diminished, but that ‘it’s not really used…often. Well, it’s used but we’ll go over it later.’  And then it moves into playing single notes, and starts on another song or two that I may or may not decide to devote a large chunk of my time to learning.

That said, tonight, I plugged in Rocksmith for the first time in a very long while (and you can see how lazy I am, running it straight from the lappy rather than going for the better sound on the TV, but I knew I would only be working in it for about 20 minutes before bed, so whatever.

I went straight to Learn a Song and the song I’ve been learning via the interwebs to see how I stacked up, or if what I’d learned in my solo time would translate to Rocksmith at all. I upped my percentage a little, but actually, the slower version with less strums is kind of harder. It was clumsy as heck and sounded pretty crap.

I think a good feature Rocksmith could add in a future version, since the program is geared towards beginners, would be some kind of notation for downstrokes and upstrokes (or, shall we say suggested downstrokes and upstrokes), because as things get more and more complicated, it’s a bit hard to get your groove on as you’re trying to figure out the pacing on the notes. Maybe making the panels slightly different colors for up and down would be effective? Not sure exactly the best way to do this without making the program even busier. but when you have a set of notes and chords that look something like:

G /// / D/// / Am /// //// //???? (seriously, the human eye can’t track this except when you go into the riff repeater and slow it way down), you’re just trying to keep up, which can often be impossible if you’re not up strumming here and there.  It would just make it easier to establish a flow if there were some very quick way to know what the most likely way your hand should be moving through a bar is. Better yet, why not give us the ability to turn features like this on and off. More advanced players knocking around may find them cumbersome, but beginners struggling to get the right flow would probably find them useful.

ANYWAY, after a few runs and a few percent up in Learn a Song, I decided to head over to the Score Attack in the Guitarcade. I knew that the last time I tried the ‘Hard’ Version, I failed abysmally.  This time, having practiced it on my own a bit, I wanted to see where I stood, and how it would go if I just kind of did it the way I’ve been on my solo time.

Well, no strikes! Yay! Was it the most amazing run through ever? Not at all. By Rocksmith’s standards I missed quite a few notes, but not enough to yell at me. Supposedly, on Hard mode, I came out at just shy of 92% accuracy, so I’m definitely moving forward. Tonight, I was able to accomplish something in Rocksmith for the first time, which is sort of positive reinforcement for all the time with youtube and/or my fancy new headphone amp. 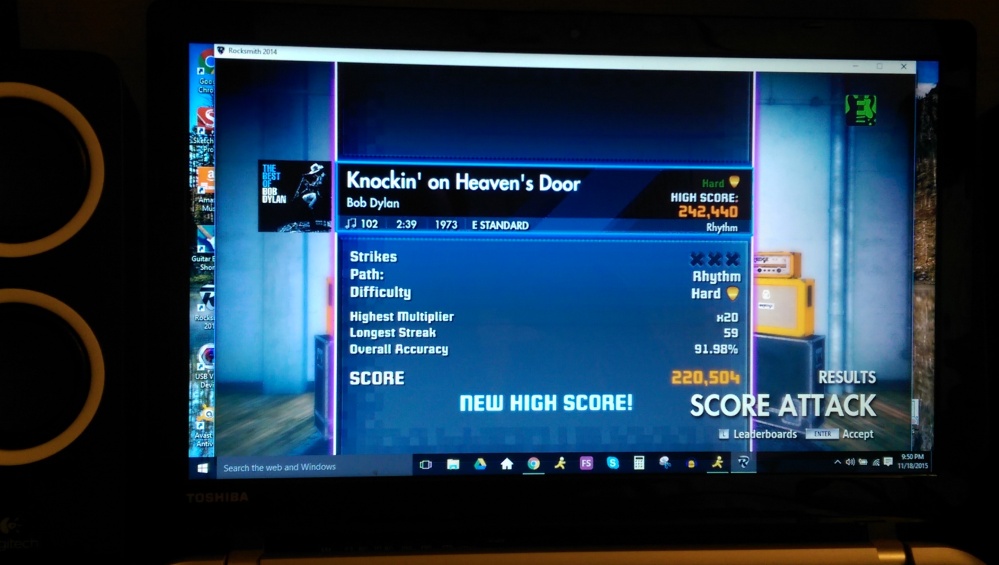 Until Next Time: Plugging in and plugging away, and maybe, just maybe, started to absorb just the barest glimpse of the surface of the theory stuff? Maybe. We’ll see if I still remember it in a week.