I really don’t feel I’m at all in a position of competence to be doing gear reviews, really, but I have a few different clip on tuners, and my cheap reverb tuner almost went in the garbage because of something stupid. I don’t mind looking stupid on the internet; that’s what I’m here for, really, so I’m going to take a second to talk about it. 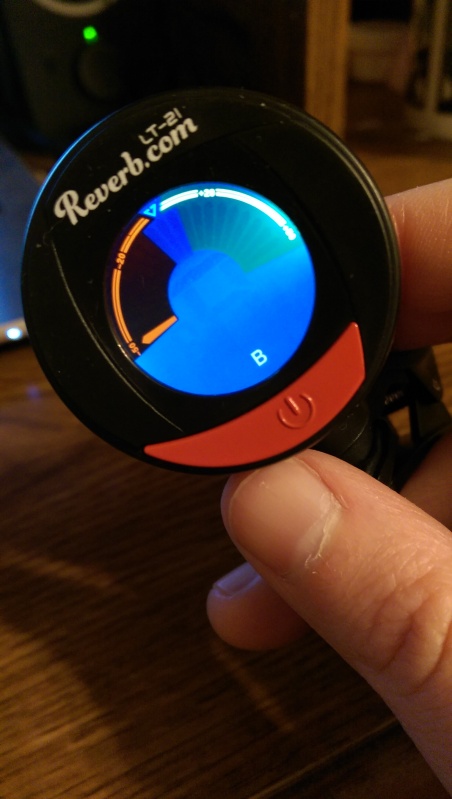 I bought this thing for 99 cents plus shipping on the grounds it was supposed to be surprisingly good for the price. But, when I bought it, there were just strings it didn’t want to read.  On my guitar, it wouldn’t read the B string. On my ukulele, it didn’t approve of the C. It did tune the bass fine, so I just put it off to the side like ‘okay, I guess that’s my bass tuner’.

Then again, I have two other tuners. My first, a fishman, which is okay, but tunes a bit sharp, and the ever-popular snark, which I bought to replace the fishman.

So, in the interest of not hoarding junk I don’t need, I was thinking maybe I should just chuck this cheap little thing. I have other tools that do the same job. Heck, I even have an app on my phone if things get dire.

But then I looked at it and saw a little B. What did that B mean? What would happen if I hit the button more times. Oh, look a V pops up. What is that for? And a U. And a C …

I left it on the C, because, after tapping through it, I realized that is the very first letter of the cycle…and sure enough, everything tunes just fine.

Apparently, there are modes. I knew this, in a general sort of way. I would accidentally switch modes on my fishman all the time because the mode button and power button are one in the same. I never used the instrument specific tuners, but always went straight for the chromatic.

It turns out, C stands for chromatic. …oh. 🙂

The reverb tuner has modes labeled: C,G,B,V, and U. Chromatic, Guitar, Bass, Violin, and Ukulele. Mine, apparently automatically turned onto bass when I first got it because, I don’t know. It was having a bass kind of day, I suppose.

Anyway, now that I know how it works, it does seem to be more or less on par with the snark when testing them side by side.

So, note to self: either fiddle with all potential settings, or actually read the manual, before throwing something into the corner to collect dust. 🙂

Until Next Time, I have 3 clip on tuners. I think that’s what we call redundancy.

4 thoughts on “My cheap reverb tuner and why I think it’s weird.”