Well, after the Pro Tools First fiasco, I’m actually kind of glad that my new toy arrived today (in spite of FedEx neglecting to update the shipping progress at all). Now, this was totally a purchase of whim. I kind of got it in my head that I sort of wanted a bodhran (see: a type of frame drum from Ireland), but I figured it was probably just a phase and, when it first entered my head, decided to resist temptation.

But see, then this sucker popped up on ebay auction, and I went ahead and bid on it because it was cheap if there weren’t many bidders, and I sort of took a shine to it. New, but open box, and with some sloppy laquerwork – but function over form, right?

Bodhrans come in several sizes, but all are super portable, and this one is a 14 inch. It is not tuneable, so I imagine if I take a shine to the whole folk drum thing, I may eventually want to upgrade, but for the moment that is way way WAY down the road. 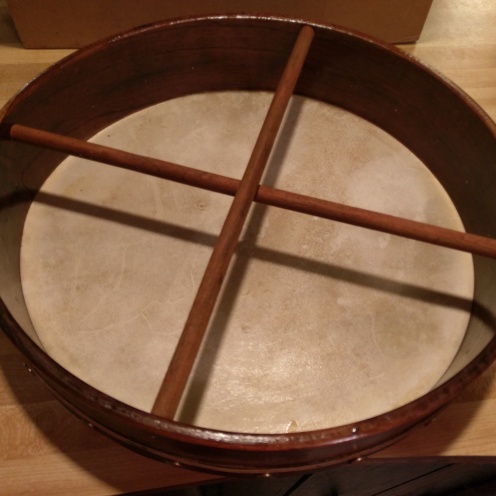 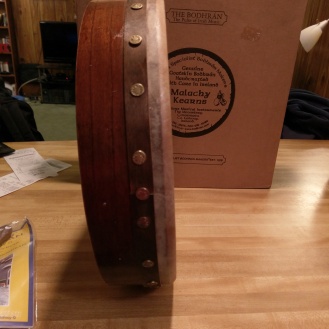 I have never touched any kind of drum in my life, so I have no idea how to play it, but that’s what the internet’s for, right? Right.

I like it though; it’s pretty. So, as the mood suits, I have a new toy to add to my arsenal of instruments I can barely play. lol.

Here’s me playing the bodhran badly, just to give us all an idea of what sort of sound the little sucker makes:

I guess I’ll have to either buy or make some sort of case for it, but for the moment I’m pretty sure it can survive sitting in my bedroom without one.

On a different subject: as far as updates on the PTF nightmare, I’ve got all the programs and associated elements uninstalled, but the lappy is still fighting me.  I’ve gone through for viruses and malware, and a disc cleanup. Hopefully a bit more TLC and a few more boots will clear out whatever that damn thing managed to corrupt. I do have a backup laptop in case of emergencies, but hopefully it won’t come to that. As things stand, lappy is running passably well, but is suffering from a bit of unusual lag on startup, and in the start menu and file explorer. Initial internet boot is slow, but once it loads, seems to run fine. So, there’s cause for concern, but no emergency as yet. So for the moment I’m back on Audacity, but with several programs to investigate as possible alternatives once I clear up the lag issue.

3 thoughts on “Because it’s not like I don’t already have enough toys that I barely know/don’t know how to play…introducing, the Bodhran.”