I’ve talked a bit in my recent journeys about how I get a much stronger signal out of the instrument line on my Scarlett Solo than the mic line. For vocals, it doesn’t worry me much – I can sing louder (roomie will love it). But an instrument is really only as loud as an instrument is, and while my main uke is acoustic-electric, I do have three ukes that aren’t. In fact, as a lefty, it is virtually impossible to find an acoustic electric tenor (not entirely impossible. I am aware of one by an utter crap of a brand, but no one of note makes one.)

Since all of these instruments have different sounds, it’s a very realistic assumption that I’m going to want to mic them to record them at some point, and that has proven far more of a challenge than you’d expect. Ukes are small, quiet little suckers.

That sent me on a wild google chase, which led to threads containing some absolutely ridiculous suggestions on the internet. And when I say ridiculous, I mean that people who know music tech and love gear have an amazing capacity for suggesting solutions that cost three to five times MORE than the device the person asking is trying to deal with.

I’m not a gear head. I like my toys, but when it comes to bells and whistles, at this stage, the less I have to plug in, the happier I am. But, I did need to sleuth out a solution, because this mic thing was going to turn into a problem eventually.

The only suggestion I was coming across was a dedicated microphone amplifier. Suggestions didn’t exactly abound. The number one was a cloudlifter. The number two was a fethead. No other suggestions seemed to exist.

Well, a Cloudlifter for a single mic retails at about $150. That idea was quashed immediately. My Solo retails at $100, and there was no way in any hell I was going to get an add on for a device that was more than it was worth.

Next up, the Fethead – that retails at $90. Better, but not by much relative to the cost of my little interface.

So, I pillaged the internet to see if there was anything else. Mogaine? That retails at about $150, too. Nope, nope, and nope. There were microphone preamps aplenty, but most of them required a power source, which would be yet another thing to plug in. Yuck.

And then, amazon turned up this little gem for me: 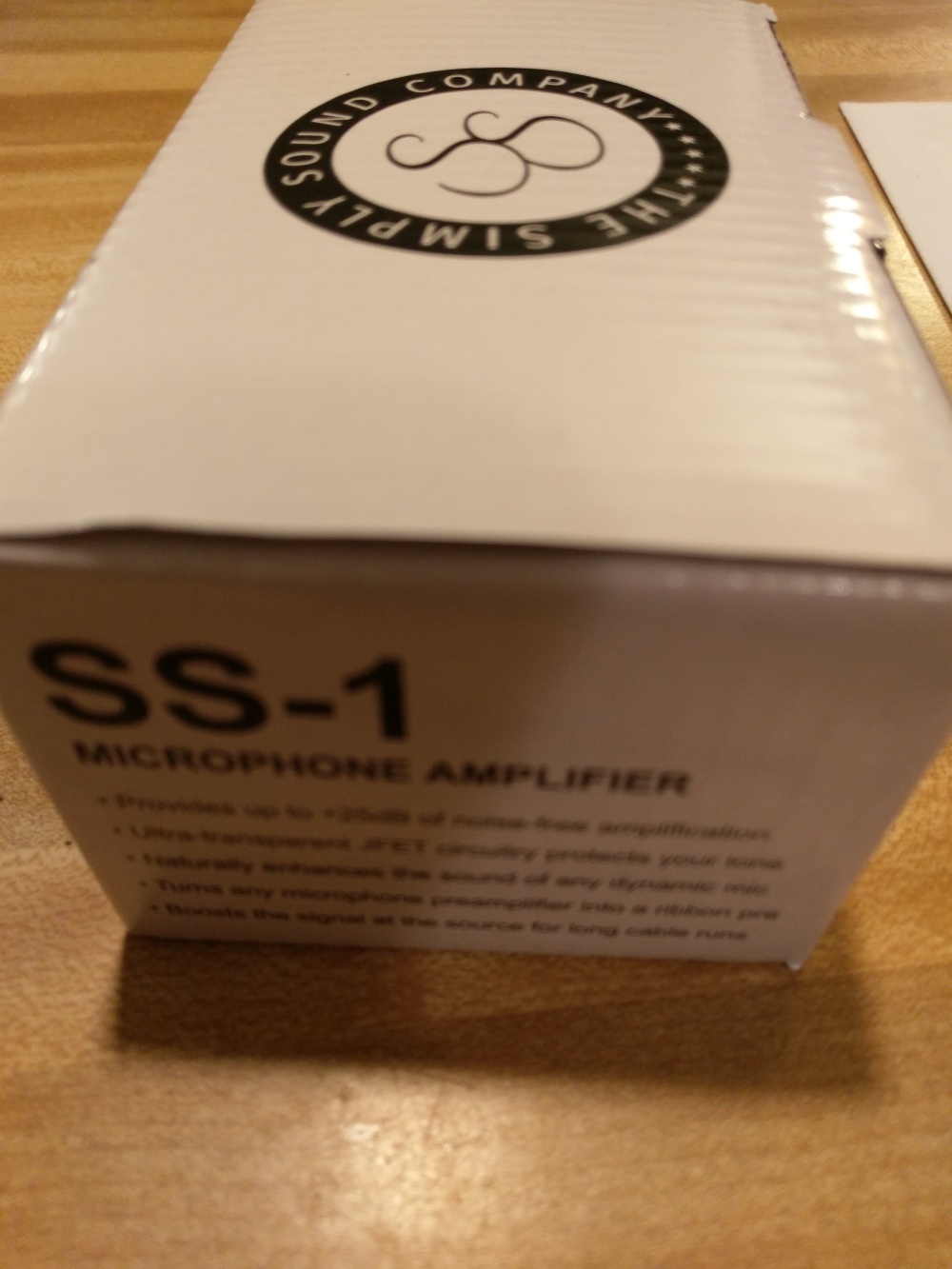 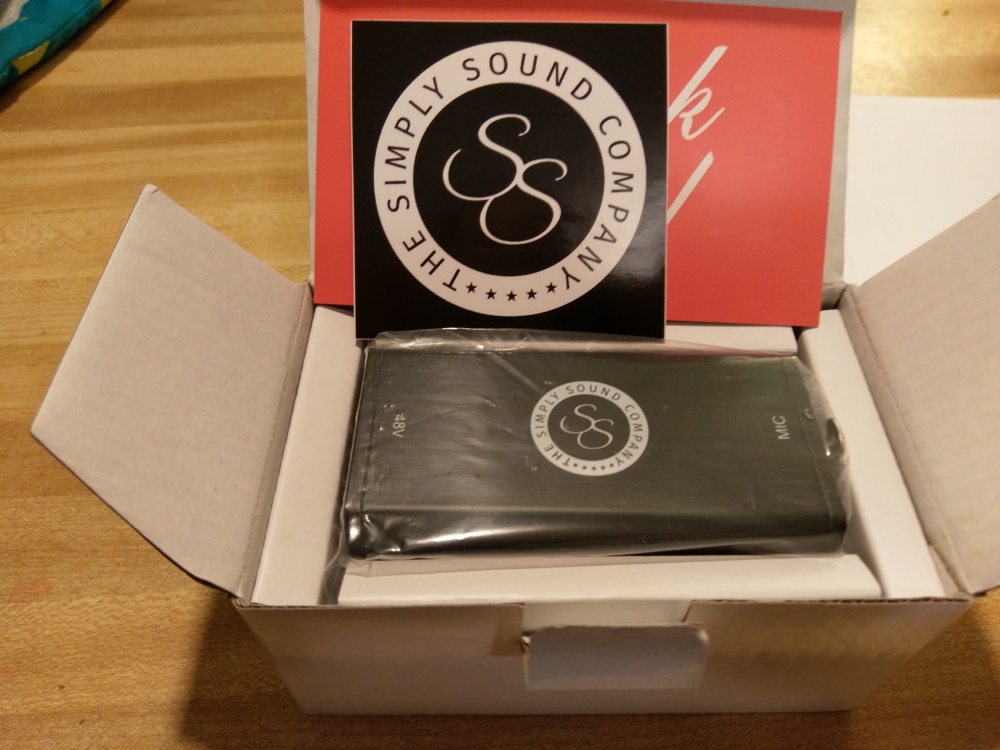 Simply Sound Co. SS-1 Microphone Amplifier. I hadn’t heard of them in any of the threads, but the retail was $50. More than I wanted to spend? Yup, but at half the price of my Solo, and the cheapest one I found anywhere other than some random junk on ebay that was specifically stated to be of lesser quality due to lower grade materials used to make a budget option (which was only about $10 cheaper than this one), and rather good ratings, I thought I’d better snap it up while it was available.

I learned the lesson in waiting after having to wait half a year for Rondo’s lefty uke-basses to to come back in stock while I was trying to be budget friendly. (Of course, now, I really have to skimp and save. No more toys for me for a good long while.)

So, let’s take a look at this little guy:

It seems solidly constructed. metal with little stick on foam feet. Mic in on one end, mic out on the other. So, yeah, I did have to invest in a 2nd xlr cable, but a short little one, so that only tacked on about 5 bucks after pillaging the internet for the best deal.

The input and output are snug fit on the cable. There’s no wobbling about to be had. There’s a little metal “Push” button to disengage.

Here, I’ve put it next to my Solo so you can get an idea of the size: 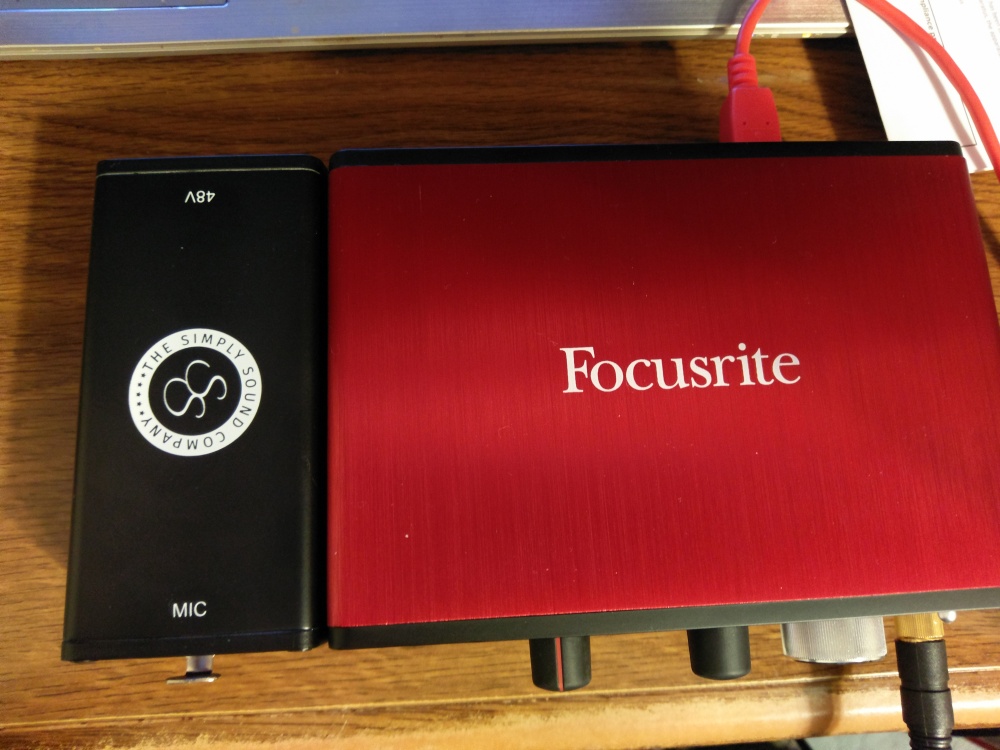 After testing, I think it was $50 well spent, considering it is literally the cheapest solid-looking option on the market.

Here are some sound clips with my Snail uke and Audacity to show you the difference this little guy makes.

For reference, I have the solo set to just a hair below 50% volume in both tests. I changed no settings whatsoever between the two tracks below.

The first track is my mic going directly into the Solo (if you can’t hear it, don’t worry, your speakers are fine):

The second track, I’ve plugged in the SS-1 and left everything else the same:

So there is a significant change in volume here. Will I use it for recording vocals? Probably not often. I can adjust the volume on my voice as needed, and adjusting a bit after recording means -for the moment- I haven’t run into significant issues here.

But, I’ve gone from not being able to record my acoustic ukes with my interface, to now being able to do that, and that’s a pretty significant difference, so if I ever want to use my Snail, or my Tenor, that’s something that this little guy enables me to do that I couldn’t before, making this worth the expense, and a bargain compared to the competition. Though, I obviously can’t compare the sound between the SS-1 and devices I’ve never used, it’s going to get the job done for me, and that’s really all that matters.

(Update 1/26/17: So, apparently the company that makes this little guy found my blog post on the subject and was happy for the positive review. They did ask if I would mind putting a link to their site on the review, which, given my positive experience thus far, I have no qualms about, so here is the link to the Simply Sound Company’s website, if you want to add this little guy to your collection: https://simplysound.co/

Honestly, I didn’t even link back to the amazon listing originally, which is odd for me. I guess I must have been distracted – or feeling lazy – lazy is absolutely possible. lol.)