This post is so overdue that it’s not even funny. The event was in May, FFS! I have no excuse. I’m just lazy. But, because I’m lazy, and this post should have happened 2 months ago, it’s going to be an overview of the bands I saw rather than any sort of in depth analysis.

As a preface –we had a fuck ton of rain this spring. In fact, as I write this post, it’s misting. This is relevant because it rained so much that the first day of the festival I was nearly flooded into my development (seriously, I should NOT have driven through water that high. I thought my car was going to turn into a submarine), and the Courtyard Stage was completely defunct because of all the wet, which derailed my original plans a bit. Some of the stuff I planned to see I didn’t get to see. Other things I had to reschedule. Some sets I only got to see part of. SPWF scheduling is always an adventure, but the weather added a level of hell to trying to figure out when and where I could see some of the acts I’d been planning on.

That scheduling is why my first musical performance of the festival was OPERA, of all things.

I am not cultured, guys. I can tell you Nicole Oliva was a soprano and had a pretty voice and that she changed her costume a billion times, but I can’t tell you that her performance won me over to the art form, really. It was neat, but it’s not like I’m going to start researching operas now. Fun fact, though: opera sung in English is no more intelligible than opera sung in foreign languages, it turns out. I still can barely make out a word of it. 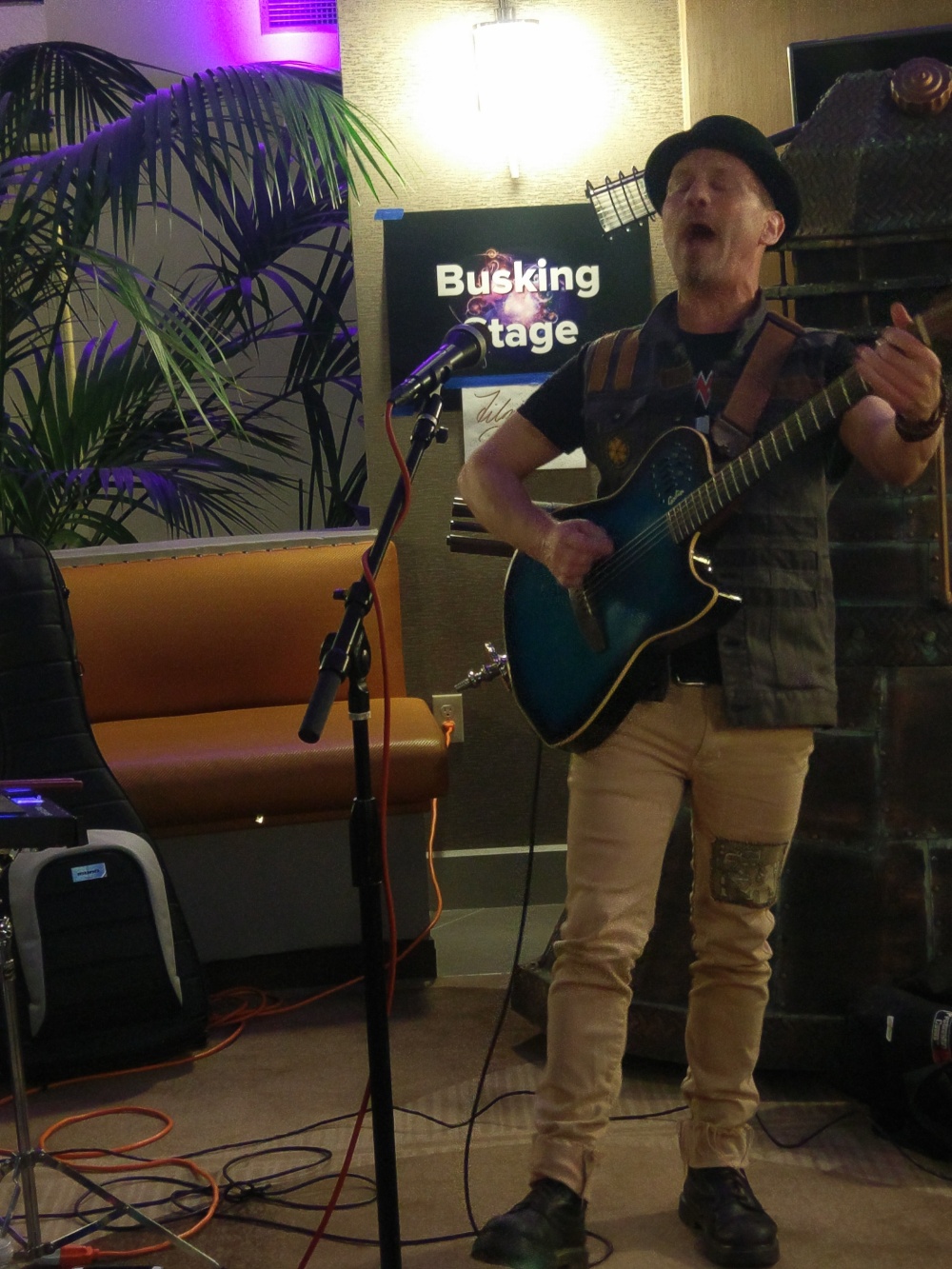 I spent the next while at educational things, not because I had a strong desire to do them, but because half of Day 1 was supposed to be spent at the stage that wasn’t working, so I ended up wandering and ending up browsing vendors or in panels because I couldn’t find the things I’d expected to be doing. And so, as I was wandering by Frenchy & the Punk’s stand, I overheard the conversation that Scott Helland’s set had been moved to the lobby of one of the hotels, in a different time slot. I wanted to catch that, because his only other solo set was pretty early in the morning, and I didn’t want to force myself out of bed just for that, when there wasn’t a lot else I wanted to do the following day before late afternoon. So, I got to watch him set up 10,000 pedals with a steampunk dalek. The dalek didn’t help at all. I think he was just there for moral support.

I am going to admit here that this is a band I had no intention of going to see, but the schedule shifting meant there wasn’t a heck of a lot going on at this hour of my Friday night, so I decided ‘what the hell?’ Normally, at SPWF, I prioritize bands from foreign shores, but I admit the description of them turned me off. It was something about electronic dance music and a stuffed bunny mascot. I almost always hate electronica, and I certainly don’t like dance music, so this wasn’t so much a point against the band as it was the fact it just didn’t sound like something that was going to be to my personal preference. But, they were pretty good, guys. I don’t think ‘electronica’ or ‘dance’ are words I would personally use to describe them. They were much closer to my rock music happy place than I expected them to be.

V is for Villains 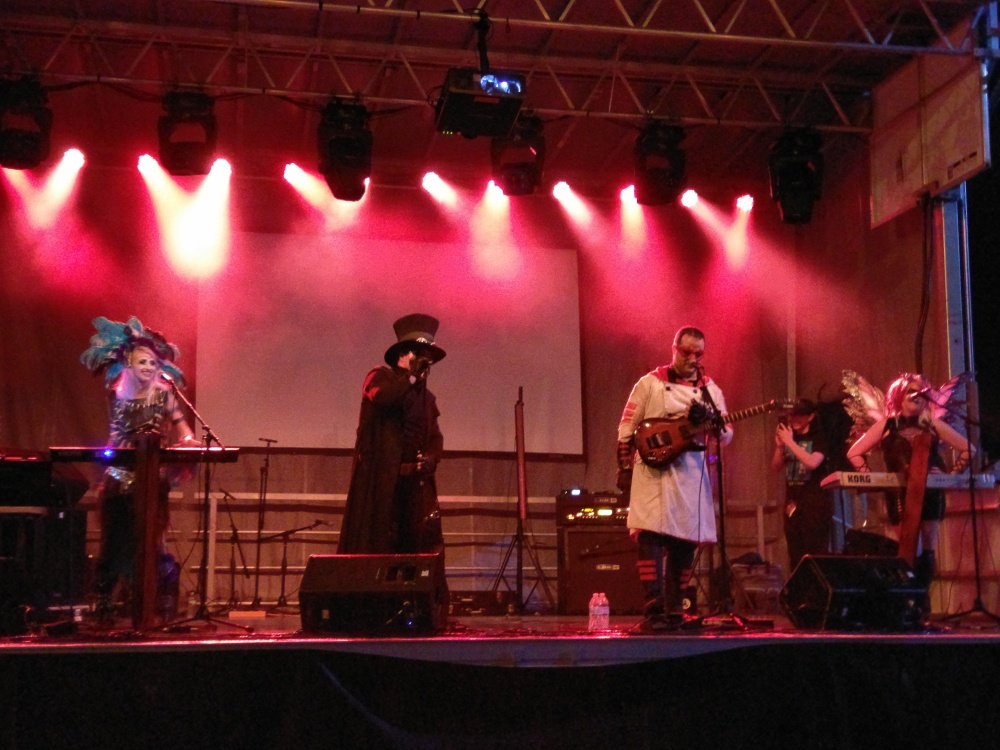 This is the set I wanted to stay on Friday to see, and the entire reason I lingered in the misty damp around the main stage for Prosspekt. Their Saturday show conflicted with…something…so I wanted to get this out of the way on Friday night to avoid making tough decisions. I was worried though, guys. I really was. As much as I love music, I’m an absolutely terrible audience member. I’m not bouncy. I don’t dance. I clap quietly, and I loathe audience participation. I’m not even kidding. I’m that audience member that stands there, takes a few photos, and mostly just stare. I’m that person who looks like they might not actually be enjoying themselves, even when I’m totally into it. So, when I found myself, right before the show, as literally the only audience member, I was worried for the band. I was crossing my fingers that the bouncy people would come along soon. Very soon. Eventually they did, but it didn’t end up being a very big crowd. Blame the weather. They were worth a little bit of misty rain.

I ended up catching part of Scott Helland’s set on a proper stage in the morning anyway, as I was waiting to meet up with a friend. 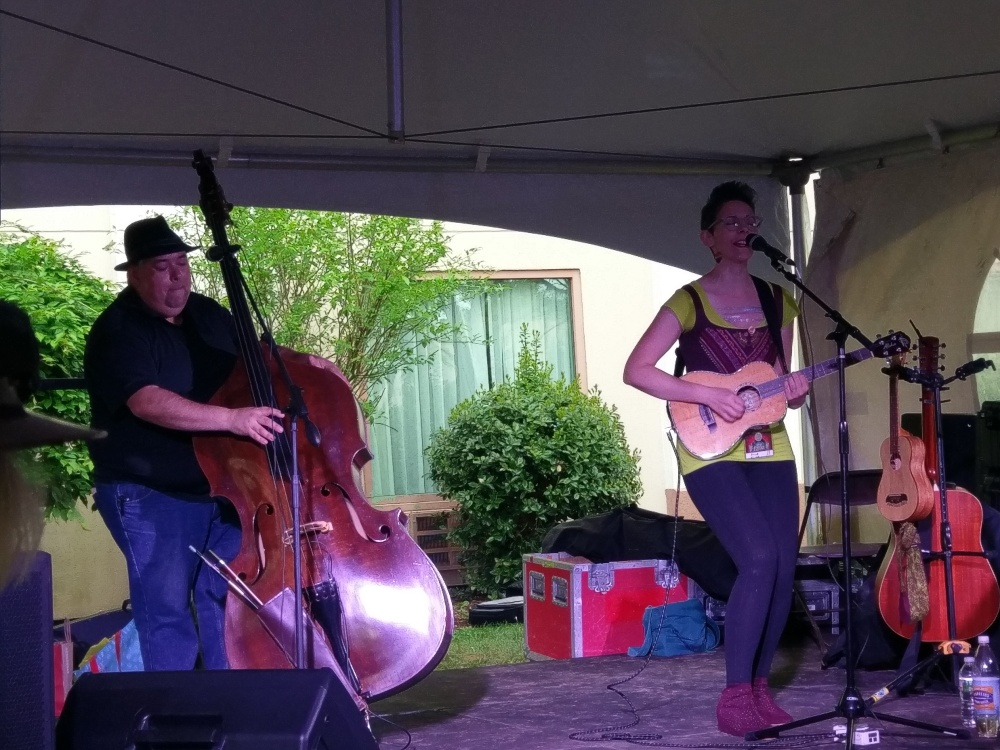 The courtyard stage was open on day 2, which meant I didn’t have to divert my plans very much. I was stationed there for a few hours. I wanted to check out Sarah Donner, knowing almost nothing about her other than that she plays guitar and likes cats. Really enjoyed this set. Also, there were newborn kittens travelling with her, so it was a double win, because music AND kittens. 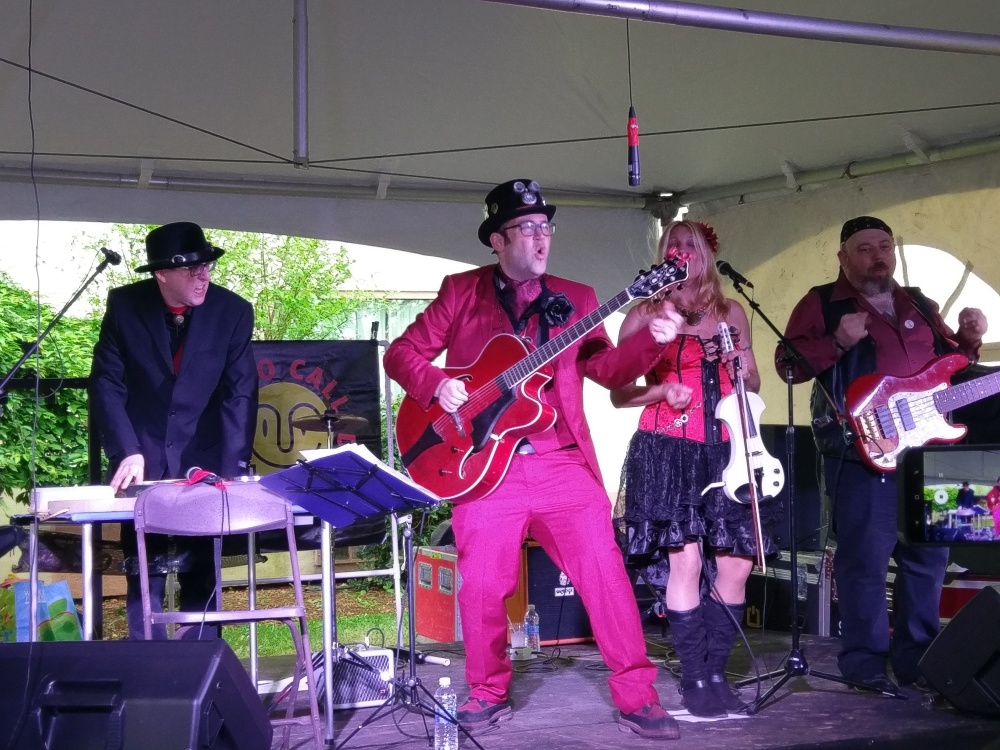 I have this ill-fated relationship with Halo shows. Every time I try to go to one, SOMETHING happens. Sometimes, it’s someone’s birthday and I can’t get out of it. Sometimes, the weather is so abysmally bad it’s impossible (this hasn’t always stopped me. I remember one show that I drove through the fury of heaven to get to.), sometimes they – for reasons unknown – close down half the roads in the state, making it almost impossible to get to the event the show is happening at. Sometimes I’m just too damn poor for the festival they’re performing at. And, sometimes, they have to stop their set in the middle because the Cake Boss is filming ten feet away. Fucking Cake Boss. So, I ended up only being able to see half of their set at this year’s SPWF. They have another show this month though, with another band that I miss every darn year at SPWF because the fates of scheduling hate me, and I’m hoping to go to that – if the Universe permits.

I think Eli has a different number of abandoned buildings every year. Sometimes, the stage is so full they barely have enough room for elbows. Sometimes, it’s just three dudes from an ever-rotating list. It’s always a good show though, so I make sure not to miss it. 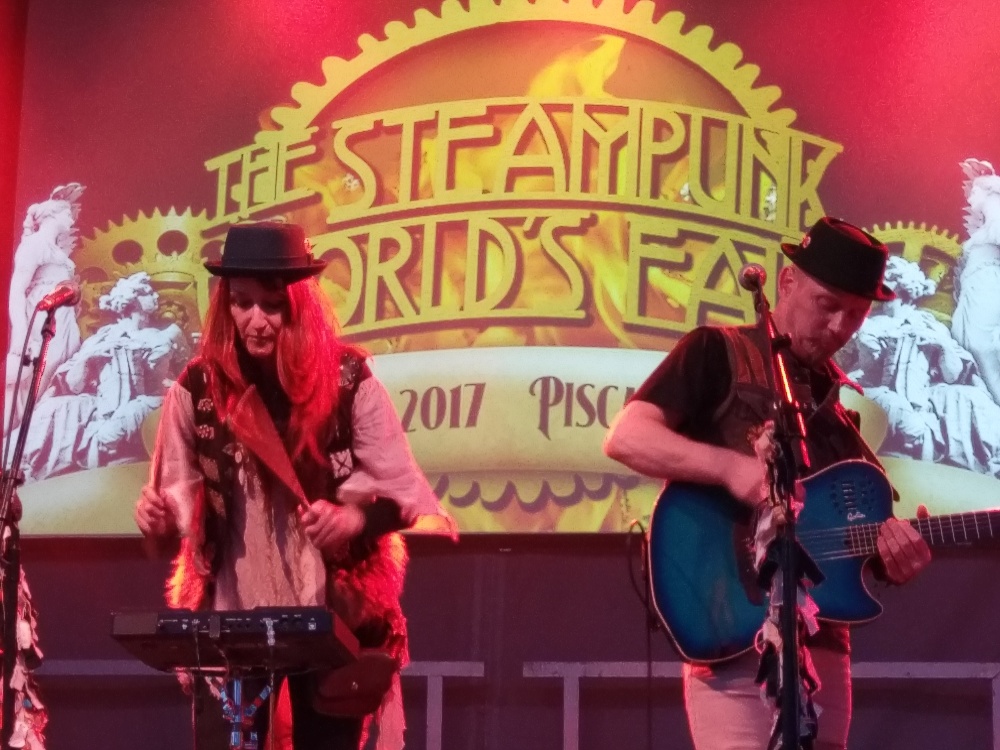 I see Frenchy & the Punk every year. It’s always a priority on my to-do list, and every year they’re still awesome. Also, they’re one of the few bands both me and my usual SPWF cohort enjoy so, even though it’s later than she normally stays at SPWF, she stuck around with me for the show.

(yes, I know this is a terrible photo. the mic was literally in the middle of his face the entire set from my angle though, so this is actually as good as it gets…)

I wholly admit, that while I enjoy all of Jeff’s songs, really, 90% of the reason I go to his set is just to listen to this one song he has about a steampunk accountant. It brings me such joy. And, if he won’t record the darn thing so I can buy it, seeing it live as often as possible (which is basically once a year) is my only option.

Victor and the Bully

This was my final set of the weekend. I was pretty much burning out by this set, but I was determined. I’d missed them the day before because of my schedule adventures, so the end of Saturday was my only chance.

In the end, in spite of the chaos a closed stage caused my grand plans, and only getting to see partial sets of a few things, I did manage to check out almost everything I wanted to.

I might only have one more year of SPWF in my future, as I understand after next year they plan to move to a new location. While it’s normal for festivals to move to meet growing demand, how far it moves, and to where, will determine if it’s still practical for me to go. But, I don’t have to worry about whether or not one of my annual traditions is going to die (for me, anyway) until after next year, and with any amount of luck, next year I won’t be so lazy as to wait two months to post about it. (Seriously, I’m not usually THIS bad. geez…)

I was at another show last night, so I should (theoretically) write about that in the very near future. And I’m hoping to go to another mid-month, if all goes according to loosely made plan (see: totally have not made a plan at all, but I think I clicked the ‘interested’ button on FB, which kind of almost counts).

On the learning curve, not much to discuss at this moment in time. Still on and off working on barre chords and progress is steady, but not solid enough that I feel like I want to move on to something else just yet.

I do have new songs in the works and/or just waiting for me to get off my lazy butt and record them, so I should, possibly, maybe share some more new stuff with you soon.

So, there’s a fair amount in the works, at least, if not much that I feel strongly compelled is worth a blog post just yet. Stay tuned.